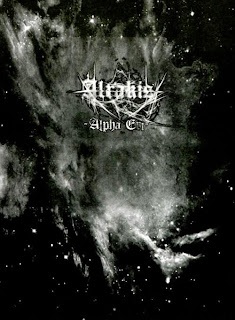 
I've discovered a lot of bands performing the more Atmospheric vein of Black Metal and a great deal of them provide some spectacular atmospheres.  I found this one thanks to a youtube user named Lightfox, who really specializes in this genre and if you want to hear some amazing bands I recommend you search for this user.  Lightfox really does a lot of research and leg work so us listeners get to hear what's worth hearing.

Alrakis is a one man project coming out of Germany, which is a country that boasts some top notch Atmospheric bands like ColdWorld.  This CD comes packaged in beautiful A5 large format packaging, but is only limited to 500 copies.  If you couldn't guess by the cover this projects theme is space.  Now when I first saw this I thought they would perhaps be more of a Darkspace clone, which wouldn't be a terrible thing, but we really got something so much more than that with Alrakis.  I would say the atmosphere Alrakis manages to generate is fairly similar to that of Darkspace, but instead of intensely blasting through their compositions, Alrakis' pace is much slower and plods along in a very melancholic fashion.  That being said, there are some riffs and sections that aren't as utterly dark as what Darkspace produces, but they are more in line with the sorrowful nature of ColdWorld's type of writing.

Alrakis definitely brings the listeners on a journey through the universe.  The track titles alone are enough to conjure up beautiful elements of different galaxies.  "NGC 6611" or "The Eagle Nebula" boasts some of the most iconic photos of far off space.  Just look at the picture titled "The Pillars of Creation" and you will see one of the most used photos. 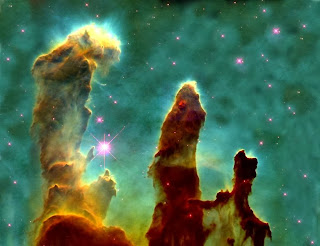 "Sternenstaub" also has a great sample from the movie "Sunshine."  Coincidentally another Black Metal band, Rêx Mündi, used this in their 2009 release.  Both applications of the sample make for quite a stunning experience, in my opinion. Referencing that film conjures up all kinds of themes and atmospheres on it's own and to have it coupled within a release of this caliber... well it just really pulls a lot of amazing things together.  The album eventually closes with a thirteen minute Ambient track called "NGC 3242", another nebula also known as "Ghost of Jupiter". One of the great things about this nebula is you don't need Hubble to see it, you can view it even with smaller telescopes. 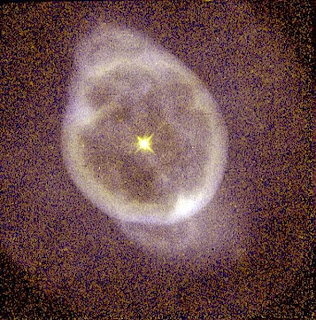 As you can tell Alrakis is a very immersive journey through the stars.  It has an excellent expansive quality one would expect while contemplating such vast distances.  It is absolutely a must hear journey for fans of Atmospheric Black Metal.