2012 was truly a halcyon year for Black Metal. The quality of music released was some of the highest quality I've ever heard. It truly outdid a lot of 2011 when I look back at what was released that year. While 2011 had some great releases, 2012 was simply an incredible year. As usual, I still made some tough choices. Sometimes I don't feel my choices hold up over time, but that is something I always struggle with when it comes to the later sections of the top ten lists. My first few choices seem to hold up over the years though and 2012 had a very clear choice that stood out immediately upon hearing it in greater detail. So here's the best material I purchased over the year.

10. Secrets of the Moon - Seven Bells

I'll admit, when I first heard Secrets of the Moon announced a new album, I wasn't that excited for it. I wasn't as into "Privilegium" as a follow-up to the mighty "Antithesis", so with line-up changes having happened, I didn't hold out much hope. I figured it would be, at least, a decent recording, maybe not the best. I was surprised to see it hit so high on my list this year, because "Seven Bells", for me, is the proper follow-up to "Antithesis". While not everything on hear was outstanding, the overlong Ambient piece during "Nyx" comes to mind, the majority of the album was very well done and I consider it worth getting.

Here we have a very outstanding newcomer to the Atmospheric Black Metal world. Hailing out Germany and I'm proud to say I was listening pretty early on to the actual release date of this album. Frostseele have really managed to capture that level of immersion that really captures the imagination. This is truly a wonderful beginning to a new project and hopefully they can keep releasing music of this quality in the years to come.

This was a new one for me, despite already having prior releases out there. Their latest album, though, far outweighs their prior releases for me. "Curse" is an ambitious album and covers a lot of amazing ground. If you like truly majestic sounding Black Metal, then Wodensthrone is a band you truly want to hear.

These last four choices were rather difficult to place, but I think I ultimately landed Grisâtre here. I really like this album in the Atmospheric branch of Black Metal, and it has reminiscent periods of Paysage d'Hiver due  to the wonderfully harsh production. This really can lend the album a rather colder atmosphere.

I wasn't too surprised when I heard "Wetterkreuz." When I first heard it announced, I was vaguely sure this would hit the top ten unless something happened out of nowhere. After their album "Galeere" they had really launched themselves into a realm of writing that transcended a lot of other projects. They really advanced the sound of "Galeere" and deepened the textures even more, which makes this quite an astounding release.


Drudkh really needs no introduction. As one of my favorite bands for many years, I figure they will usually hit my top 10 in the year something is released. Provided they stay away from the weird material they went after with "Handful of Stars", which was not a good album at all. Perhaps this puts me at some level of bias, but it is difficult when a band consistently writes music of this high quality.


Another newcomer to the genre. This time Elderwind hail out of Russia and if you, like me, have fallen in love with an earlier project called Walknut, then Elderwind is a must hear. They're different projects, sure, but Elderwind manages to, also, capture that vast and beautiful atmosphere that we heard on Walknut. While we all eagerly await a follow-up to that album, Elderwind, have decided to answer the call in just as magnificent as a fashion. Truly a must have album.

It is not often you will see me ranking a Melodic Black Metal band so highly, since I usually don't go after that style as much as others, but here we are. I feel in love with the Der Weg einer Freiheit sound the first time I ever heard it and when I saw announcements of "Unstille" floating around the web, I was very excited to hear it. A follow-up to the "Agonie" EP was likely to be incredible, and the band certainly didn't disappoint. Everything down to the art direction is simply amazing on this album.

Here's something I never thought was going to happen. Despite Marduk's increase in quality of the years I actually never thought I would rate an album of theirs even close to this highly. I feel like this album sounds far more like a Funeral Mist album than what Marduk have come to be known for over the years. "Serpent Sermon" has this dark and ugly atmosphere, whereas the prior albums focus more on intensity and pummeling a listener. This makes "Serpent Sermon" feel a lot more like the follow-up to "Maranatha" than "Wormwood". Either way the band has truly outdone themselves this time around and I am looking forward more than ever to what Marduk will be producing in the years to come. I was already sold with "Rom 5:12"... but "Serpent Sermon" pushes an envelope I never thought Marduk would breach.

1. Mgła - With Hearts Towards None

This is the type of album that comes along very rarely. When I first heard this I knew there was nothing else out that could come close to topping this. This is the type of release that truly stands the test of time and changes the way we, as listeners, look at Black Metal. Throughout their career you could hear that Mgła was trending towards this moment and after "Groza" I think we all expected a good album from the project, but nothing of this caliber. After having seen Mgla live, my image of this release is only further enhanced. This is a release that I consider a must have and likely one of the best albums of all time.

The most notable material I got was Azarath's "Blasphemers' Maledictions", which was quite a stunning release. It has a rather new direction for the band and is seriously launching them to a whole new level. Gortal's "Daemonolith" was a great follow-up to their debut album. Just very good punishing Polish Death Metal. Masachist's album "Scorned" turns out to be what we've all wanted to hear as the follow-up to Decapitated's "The Negation". While I didn't find Masachist's debut as endearing, "Scorned" really stands out to me and I found it extremely well done. Sphere's "Homo Hereticus" is one of the more intense and heavy albums I picked up this year. I also purchased the obligatory releases from Grave and Unleashed. While I enjoyed the latest Unleashed, I don't seem to have ventured into the world of Grave much over the year.

Who else was up for consideration? 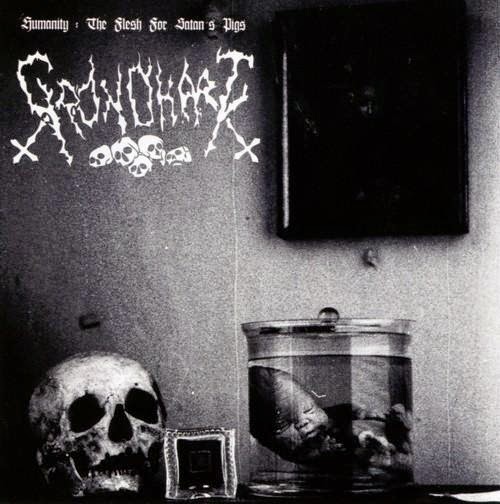 1. Fucking Slaves
2. Humanity: The Flesh for Satan's Pigs
3. The Last Dawn of Human Race
4. The Gate of Nanna (Beherit Cover)
5. Incantations of Dark Gates
6. The Blackest Blasphemy
7. All Bullets of War


I think this was a somewhat random purchase for me. A couple of my motivators was the fact that I really like Czech Black Metal and I think I noticed that Asura was a member of Trollech, and having a Lord Morbivod connection is never bad in my books. So, I picked this up not really knowing what to expect. What we got was a little mixed, but some decent tracks of traditional Black Metal.

The first three tracks are filled with wonderful guitar work done in the usual Czech fashion, drawing influence from the likes of Maniac Butcher and, naturally, Stiny Plamenu and Trollech. There are times that the work has a fairly Finnish feel to it at times. I guess the Beherit cover should come as no surprise then! The only complaint I have during this material is the vocal performance, which isn't particularly great, but it's not terrible either. The part that makes it a bit off putting is the fact that the vocals are very loud in the mix. They really overtake the music and Asura feels like doing the Arioch thing where he fills as much space as possible with vocals. It's quite unfortunate, because the music underneath is extremely good. Then for some reason "The Last Dawn of Human Race" has a very distinct Darkthrone influence, which feels very out of place with the previous guitar work. I think it even bears a resemblance to the more modern Darkthrone, which I, personally, don't like at all. It's fine if these musicians like that, but the placement feels very off putting after the prior three tracks.

This section sort of marks a turning point for the album and we delve deeper down that slow plodding Darkthrone hole, granted in a far more traditional Black Metal fashion like their middle career. There is attempt at infusing groove/catchiness into sections, but much of these slow sections seem to fall into Beherit fashioned writing, but not as much of a mess as the original. If you enjoy that Beherit and Darkthrone blend, you may find far more enjoyment out of this release than I did towards the end.

I just feel like I've sort of been lead astray from the beginning. What started off as some Black Metal I truly love ended up transforming into a totally different style of Black Metal towards the end. I can understand being influenced by multiple things, but with such stark differences and a clear line where it shifts this winds up feeling like two musical projects shoved together. Still, I'm sure there is a fanbase for the latter half of the album, it's just not me, because Grondhaat have certainly performed that style quite well. The only overarching complaint through all the tracks is the vocals need to be turned down.