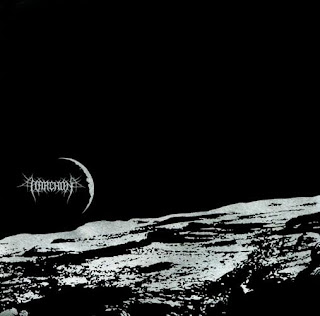 
It has finally arrived, the debut full-length from Darchon! This release contains over an hour of music, so make sure you set aside some time to experience this journey. I was lucky enough to get the limited edition version of this which comes with a poster and bonus CD. This edition is limited to 100 hand-numbered copies and I have #2.  The regular edition is limited to 200 copies.  As with the split, this comes with an envelop with a different cover (above) than the CD itself. The regular CD is inside the envelop and comes in a beautiful multi-panel digipak. The bonus CD is just a CDr in a small plastic envelope, probably so they could fit everything in the main envelope.

Despite the fact that his is Darchon's debut album, some of the music is actually quite old. Much of it was actually written and recorded before the EP even came out. So, in terms of writing, the EP is the 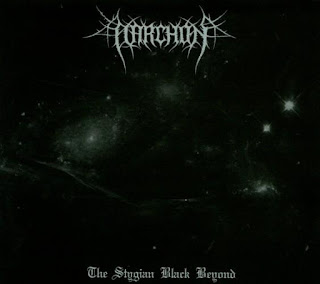 most recently written material. Some of this material dates back to 2009/2010, which is around when the Split material was recorded as well. Given the stark influence by projects like Darkspace, Darchon has a bit of a different format to their album. They arrange the material in such away that it mostly alternates between Black Metal and Ambient tracks. Darchon's Ambient prowess is a step above some the main projects that follow in this regard. The integration of synth work at this level manages to elevate the overall compositions and add a layer of complexity into the mix that can feel a bit different. Unfortunately, and probably by design, the riffing is rather overly droning. In this area Darkspace and Paysage d'Hiver cannot be beaten, they bring such solid riffing to the table that it is tough to compete. Which is why I think Darchon is really trying to do something a little bit different in the grand scheme of things. This droning approach that is more in line with Ambient really works in Darchon's favor making a release that is more mesmerizing in some regards. It's great music to just zone out, because it doesn't overly grab your attention, so it has a more meditative quality. The closing track "Unseen Kingdom" is one of the most unique tracks from this brand of Black Metal. It crosses paths with Industrial quite a bit and reminds me a lot of the Mexican project Hocico. If Hocico played Black Metal, this is, probably, what it would sound like.

The bonus EP comes with two extra tracks on of which is another Black Metal song. There isn't much info about this in any of the packaging, so I'm not sure how old the tracks are. "Cosmicism Pt 1" fits very well into the overall aesthetic of the album and really just continues the themes we've heard before. "Pt. 2" though, is a very different ambient track. This is extremely in line with the Ambient sections Darkspace uses and it just feels way more threatening. Layered into the background is a lecture about Black Holes and with the static ambience makes it a really interesting piece. I almost wish these two tracks weren't only on here and instead made their way onto an album. The Ambient piece would be a great setup for an intro or an outro of an album.

In the end Darchon created quite an awesome debut as far as I'm concerned. I can see why people might not like it as much, despite the heavy Darkspace influence, I'm not sure a lot of people are interested in listening to this much Ambient in between each Black Metal track. I think it makes for an interesting experience and presentation, but I'm rarely in the mood to listen to both, so I find myself skipping the Ambient tracks and just delving into the Black Metal sections more often. I think that's the only major thing people would really have a problem with, or thinking this is very derivative of Darkspace, but it's really not. Darchon's journey and feel, while inspired by the likes of Paysage d'Hiver and Darkspace, do have a fairly different feel overall. So, I think Darchon is some relatively brilliant stuff and I'm interested to hear new music from this project for sure. Hopefully all the material he was sitting on is out now and he can march forward with writing new material. 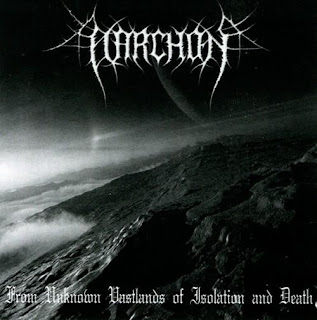 
After a couple years Darchon return with two more tracks, only one of which is a Black Metal song. It's impressive how slow some people can work on material, but I guess he just wanted to throw something out into the world to show the project wasn't dead. "From Unknown Vastlands of Isolation and Death" reminds me a lot of what Darkspace does, but this feels like a lesser or a lighter version of that power house of a project. Darchon is clearly influenced by this kind of material, but Darchon also touches on a lot more various Black Metal inspiration throughout a lot of his writing. The vocals are a barely existent and very buried in the overall mix of the music. Vocally it's not that spectacular, so I can see why they would bury the vocals in the overall mix. "The Pleiadas" is an Ambient, mainly piano driven track and it's actually quite enjoyable. It has some extremely spacey qualities to it and really compliments the track name. When it comes to performances of this nature I would say Darchon is actually a far more talented composer than the likes of Darkspace, but Darchon does need a bit more work in the Black Metal department if they ever hope to truly compete with stronger projects of this nature. While the material on this EP may not stand out in the grand scheme of things, it's good to know Darchon is still around and I'm still looking forward to any music released in the future. 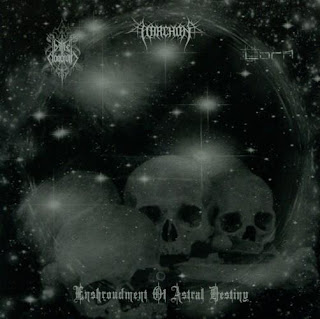 The first stirrings of Darchon were found originally on myspace, but it doesn't seem like it was too long before they were able to produce a split with the likes of Battle Dagorath and Lorn. Darchon is a one man project from Greece and composes some extremely well made material. It seems Kunsthauch snapped him up real fast and has been producing some high quality physical releases ever since. This first release comes in an envelope with a beautifully designed digipak.

If you delve into Darchon and find yourself reminiscing about things like Darkspace you probably aren't too far off. Darchon is fairly similar in design and aesthetic to Darkspace. They even put to use some excellent synthesizer sections amidst their raging Black Metal. While Darchon's material is fairly long, it's nowhere near the level of song length that Darkspace reaches for. Despite the cosmic themes and synthesizers I think Darchon is more similar to Paysage d'Hiver in their overall sound. Like these projects Darchon sadly uses programmed drums. While they don't add much beyond a monotonous beat to the project, we're really hear for the overall atmosphere being generated. "Shadows from the Elder Chasm" actually has moments that remind me over early Emperor quite a bit, so hearing that blended in with the more modern take on Atmospheric Black Metal made for an interesting aspect that worked very well. "Breath of Typhoeus" is the shortest track and not a Black Metal song at all. Instead it's more of an Ambient type of track, but I actually which is was quite a bit longer like the actual Black Metal songs, because it really puts you in an impressive atmospheric space after listening to the other two songs.

Darchon have an impressive introduction to the world and this is absolutely a project I'll be following in the future. I really hope a full-length is forth coming, because a three way split isn't going to be enough for this project.