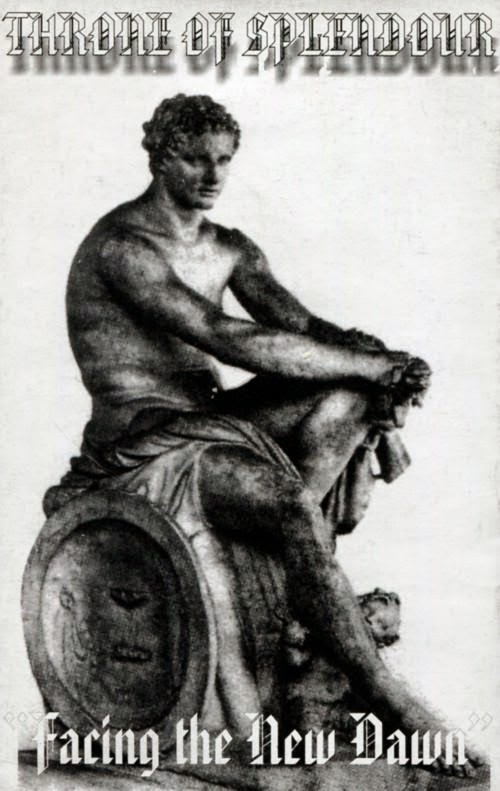 
Throne of Splendour is a little known project out of Greece. The release of this tape on Garazel Productions is really what brought me to purchasing the tape, which is really just on the demo material level. This is also their second tape, I have missed out on the first and have, truly, no idea where I would even track it down. I will simply wait for someone to come along that wants to part with it. This tape, however, comes as a pro-printed double sided booklet with a dubbed tape.

Throne of Splendour is not your typical Black Metal project. It feels like they are sort of a slightly new take on the Graveland sound, to be honest. One of the major reasons this gets a Pagan Black Metal feel is because of its less conventional drumming approach. Rather than use a drum kit, they stick with traditional old world hand drums and a tambourine to keep the pace of the songs. The intro song and closing song "Facing the New Dawn" are simply clean guitar songs. They certainly create that cold and old atmosphere you would expect. "Winds of Pride" and "Following the "Eternal Voices" have distorted guitar lines that resemble the work of Rob Darken in many ways. They also feature the traditional harsh vocals of Black Metal. The music definitely has that epic and ancient feel to it, so in that regard they have certainly succeeded. One of the strange things related to this music is that it is very anti-Muslim or "Moslem" as they've written it in the booklet. I find this interesting, because this is a very early occurrence for that stand-point in Black Metal. It is only later that this stance becomes far more prominent in the genre, going beyond the more usual anti-Christian standpoints.

Overall this is pretty good and quite interesting material. So, if you've ever wanted a slightly different approach to the Graveland style this might be of interest to you. I think in later Graveland albums you would even see Darken including a lot of these elements in his music, so its tough to say who influenced who in some respects. Graveland is certainly the far more well known band in this case, hence the references. The musicians involved with Throne of Splendour seem to have stopped being involved in the music scene altogether though...